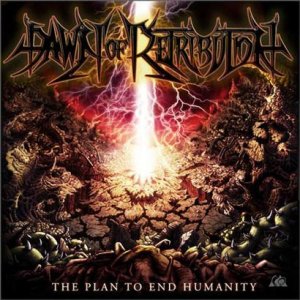 The debut release from these Aussie extreme metallers will kick your arse.

When you listen to DAWN OF RETRIBUTION’s debut release, it’s easy to forget that the album is the band’s debut full-length. Previously, they had only released their demo Blood Drunk in 2007.

This album, released in 2010, is quite lengthy; the average track length is 5 minutes. It is almost a touch too long. But I am a person who prefers to be left wanting with a release like this, not completely sated. Sated I was, though, and happily.

The Plan to End Humanity is a kicker of a debut. DAWN OF RETRIBUTION play a style of death/thrash that is undeniably Australian in its sense and in its extremity. Opening track Ascension of the Shadow, within not thirty seconds, brings some nice kicks to the riff that saves the opening track from sounding like any of a multitude of other bands. Which, honestly, with this sort of style, it’s not hard to do (sound like other bands, I mean). These guys layer thrash elements and gritty death with aplomb. That is, they know their metal and they deploy it with confidence.

With this album, you get driving riffs, underpinned by a solid rhythm section; some pretty licks and nicely written solos; some well-placed melody. What I like about it is that the melody offsets the bulk of the material, rather than floating uneasily and greasily over the top. It really appeals to me as a thrash fan! The album is pretty full-on, too, and I suggest that those who like their crossover metal, with more breakdowns and chuggy shitfulness in it, could find it a gateway drug into more extreme subgenres of metal.

I’ve seen online lately that there have been more and more instances where DAWN OF RETRIBUTION have been disallowed from playing certain bills because they are ‘too metal’, or ‘too extreme’. That’s as good a recommendation as any, in my book. If you get a chance to see them (they’re in Geelong in south-western Victoria), do it.

Fans of death, fans of thrash, fans of intelligent, good, extreme metal, will dig this album. And if nothing else, it’s an indication of what a hard-working band can do on their first full-length album. I’ll be watching DAWN OF RETRIBUTION in the coming years to see if their (notoriously difficult) sophomore album reaches the benchmark set by this one.

DAWN OF RETRIBUTION’s The Plan to end Humanity is out now. It’s an independent release, and you can get it here.