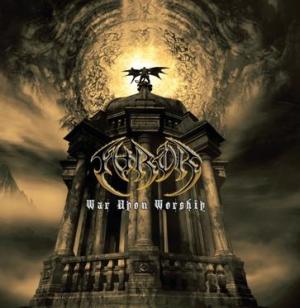 Can you imagine my surprise, seeing a disc from THE FUROR in my mail? No? Maybe it would help if I told you that the last time I got saw this band in the post was probably four years ago, when their last release, the EP Assault By Fire came my way. It may even have been earlier than that.

Who knows. It’s been fricken ages.

Evidently their time has not been wasted. I’ve loved The Furor since first hearing their Westralian black/death armageddon. Happily, War Upon Worship has not disappointed me; oh no. It has instead given me greater hope that they may reappear on stage around these parts sometime in the future.

If you are not familiar with The Furor, allow me to clue you in. Warped minor-key guitar work, syncopated blasting, a sense of timing and speed that fits their war metal lyrical themes like a glove. Imagine it done with professionalism and aplomb.

My only real dislike of this album is that perhaps it is too technical; but that’s such a minor thing as to allow you ignore it happily if you wish. The Furor has always been this way.

The reason why I dislike it, is because it has a tendency to distract you from what is actually going on. That is, it sits uneasily on top, rather than it being part of a collective and consistent whole. It’s more about showing off than anything else.

Which is why I said, feel free to ignore it. Some people love that shit. I find it just a bit silly and showy. As a whole, the release is excellent. My nit-picking is just that: nit-picking.

Really, though, it’s not the nuts and bolts of this release’s music that is the grabber. It’s the whole vibe of it; the mood, the furious intensity. And it tends to stay this way for almost all of its nearly-47 minutes.

If you’re into Australian war metal, you must own this album. Go! Get!

THE FUROR’s War Upon Worship is out now on Prime Cuts Music.