[RELEASE REVIEW] Beyond Description – Proof of the Truth (CAH Records) 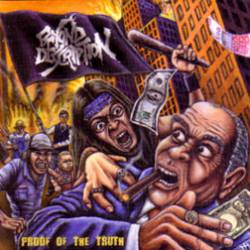 I love getting thrash discs in the mail. You know they’re thrash instantly, if they’re old-school enough, simply because of their artwork. This disc was no exception. Well, except it’s a crossover/thrash band. This splitting of hairs does actually become important. You’ll see why.

BEYOND DESCRIPTION are thrashers from Japan. Formed in 1988, they have only three full-length releases to their name; of which this is one. Lyrically, this release is highly political, which is pretty much what you’d expect from a band like this. You get lines like:

Even if it’s not what we wished for, it’s us that chose our leaders, it’s our responsibility

As a result, the gap between the rich and the poor continues to widen,

the moral crumbles, the environment worsens,

Soon the doom will be obvious to everyone.

Musically, Proof of the Truth is full-on from the beginning. These guys launch you into a ripping, shredding release right from the get-go.

The first time I heard this release all I could do was groan at the apparent Metallica-rip-off-ness of how it sounds, especially vocally. I think that, indeed, these guys must have been heavily influenced by the early thrashers, but I also think that my first impression was an unfair one.

Well, not unfair per se. But it was unfair that I was willing to write this album off based purely on that impression.

Furiously paced, with short songs, this album is literally a twenty-minuter (the longest song goes for less than three minutes). It’s a tight, professional, polished performance; the production is good; the leads are well-placed; the bass lines, especially in and around track nine, Reveal, are well emphasised; the grooves are nicely written. As far as thrash goes this is almost as good as it gets.

Except… I found myself getting bored. Yawningly bored. I nearly didn’t want to listen to it again.

Which is weird, given (a) that I adore thrash, and (b) that this album is so short!

But I think I worked out why the boredom occurred. Although this is technically excellent, there is just not enough variation in it. I’m going to pin this on the band not as a failure, but as remnants of their early hardcore punk roots, which still crosses over in their sound. Hardcore punk has always bored me. Apparently it still does!

In any case, and regardless of this hiccup, Beyond Description’s Proof of the Truth is a grower. I’m gonna give it more time, because I think it’s going to be worth it.

BEYOND DESCRIPTION’s Proof of the Truth is out now on Crimes Against Humanity.