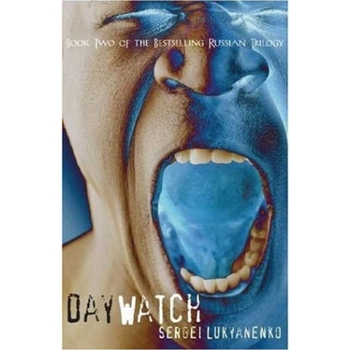 In the beginning of this book, having been so used to the primary protagonist of the previous novel, Anton Gorodetsky, it took me a little while to work out what was going on. I had no idea who this Alisa Donnikova was or why she was important. Or why this second book in the series was focusing so clearly on her. For a while I wondered if the novel was going to be a series of character-based short stories.

But it turned out that it was all just me being impatient. Gradually, one discerns why Alisa’s circumstances are so important; but interestingly, one does not really discover this until much, much later in the book.

It was not, in fact, until I was on the home-run of this book – the last twenty pages or so – that I properly understood the statements from each Watch in the in the front-matter of the book proper:

Day Watch is a far more interesting story than Night Watch. It proposes some interesting concepts to challenge your own notions of lightness and darkness, too. After taking so long to read Night Watch, I devoured Day Watch in a matter of weeks, and will hopefully finish the third book rather sooner than that.

Lukyanenko is an extremely talented writer. As an editor, and former publisher myself, I am a really tough audience. Yet I fall deeply into the spell of his fiction quite easily, and am happy to stay and wallow there. For me, there is no fight between enjoying the story and being aware of the text; this is really rare, and is probably why I enjoy his works so very much.

View all my reviews on Goodreads