Portrait of an artist: John Raptis

Allow me a moment of indulgence to write about one of my favourite photographers: Melbourne’s John Raptis. 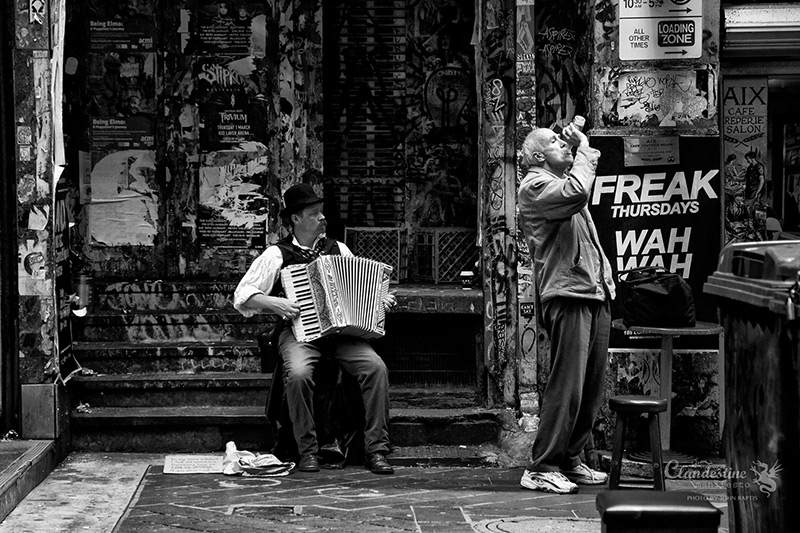 Allow me a moment of indulgence to write about one of my favourite photographers.

For context, I lead a rather haphazard sort of life, where lots of things fall over all the time. This includes PR work, writing reviews (or, rather, writing full-stop), reading the many books I want to read, cooking, spending time with people, working, indulging myself, and keeping a finger on the creative pulse, which I used to be sort of good at.

Pretty nearly the only two constants are dancing (who would’ve thought!) and working. These two are constant because I work to live, and dancing is one of my innate loves, having danced first when I was two years old, and having lost it for the thirty years in between. That and it keeps me moving, creative, and somewhat sane.

There are few artists for whom I indulge my sensory appreciation, and this particular photographer – John Raptis – is one of them. John first came to my attention when he wanted to shoot for a metal mag I was publishing and editing at the time, Metal as Fuck, and never one to say no to anybody, said “yeah no worries”.

What I didn’t expect was to see work that blew me away. I didn’t bother going through galleries much, or googling people, I just literally gave them a pass to a show, told them what the usual rules are (three songs, no flash), that I prefer either all-colour or all-black-and-white and no in-between, and let them go their hardest.

Colour me blown away by what John consistently produces.

If someone asked me who the best rock photographers in Australia are, there is no way that John wouldn’t be in the top ten. He has a beautiful eye for structure, movement, and moment. His level of anticipation is fabulous. His ability to get a full sense of a show, sometimes in just one shot, is extraordinary.

I believe this comes from his continued study of people and place, his consistent captures of the meaning of either or both. Regardless of what anybody else thinks, to me this is really the essence of portraiture. I don’t care if the portrait is of a brick wall; a photograph of a brick wall can evoke just as many emotions as a high processed studio shot of a weeping woman. Sometimes more, depending on the nature of the shot.

As an urban artist, John Raptis is one of those people who shoots what he knows, and what he loves. Generally, this is the city in which he lives: Melbourne. From street performers, to laneways, from the destitute to the wealthy, each of his works has the same effect on me. He is literally one of those photographers at whose work I can’t stop looking. I find myself looking through his galleries regularly; like, weekly, regularly.

Like a great many artists, amongst whom I will include myself as a writer and dancer, John does not consider that his talent or ability is anything much to comment on. I love this about him, as an artist.

While feeling this way can be total arse, especially when one is surrounded by talent left, right, and centre, it also means that one is never totally satisfied with one’s work.

Satisfaction is death to an artist. Satisfaction results in a lack of a drive to improve, to create more, to capture that one moment that defines oneself.

I know a great many artists, musicians, dancers, writers, who become happy with their work. I don’t think I know one who is ever satisfied.

John works full-time, shoots on the side. He doesn’t make money from his art. He is not a highly exhibited artist. His works have appeared on and in books, and around the web, but mostly he shoots for himself. He shoots because he can’t not indulge his art. It’s in his blood.

Without going into long diatribes about amazing people who are driven to create, and without waffling on for too much longer, suffice it to say that the constant presence in my “virtual life” – for want of another phrase – of this photography keeps my creative spirit bubbling. I love seeing friends generating consistently excellent works, either with their tools of trade or with whatever they have to hand. And it’s rather an honour to know someone whose work is just so damn good.

Whether or not John’s work is ever identified by the Greater Good with prizes, or exhibitions, or recognition, is of absolutely no matter. Because when he departs this mortal coil, he will have left behind him an outstanding body of work, a great amount of which portrays the spirit that keeps Melbourne pulsing with life.

You can see John’s work at The Clandestine Manifesto.

6 thoughts on “Portrait of an artist: John Raptis”