On Dave Mustaine and the World’s Wrath

It’s time for everyone to calm the fuck down, and start thinking critically. 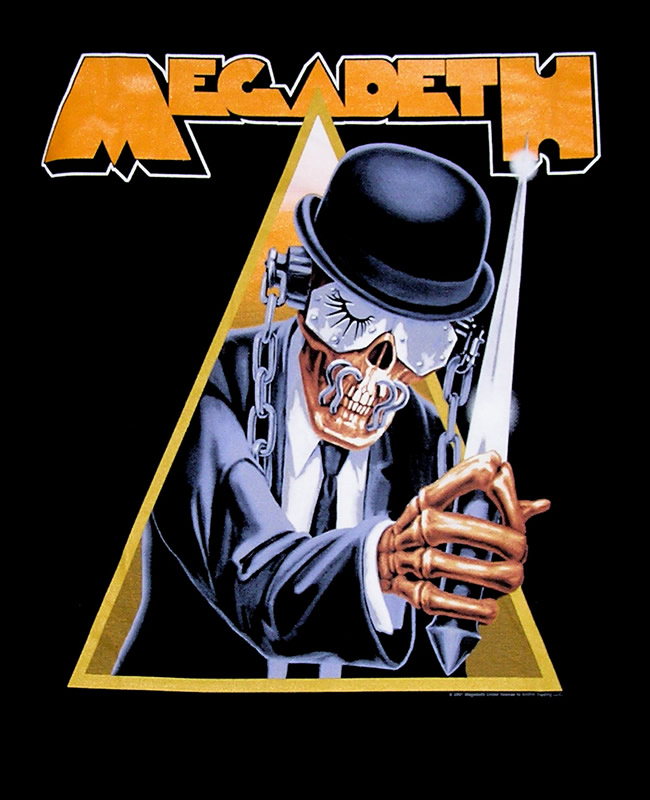 In the past little while, let’s say a week or so, Dave Mustaine has come out and said some more shit that has caused metalheads the world over to go ballistic.

And ballistic really is the word. If you look at Blabbermouth and the sheer amount of comments on each related story, there are hundreds. Many of them talk about smashing and burning collections.

Nikki Sixx has come out telling the world that Mustaine is an arsehole, other musicians have commented similarly; only one, Chris Locicero of Forbidden, has said hey heads up, he’s really close to the truth. And the reaction of the public would suggest that he is right.

As much as I want to weigh into this debate about patsies and tyranny, I am not going to because it will be especially counterproductive. What I am going to do instead is ask everyone to calm the fuck down.

Sit down, breathe, and assess why you are so upset.

The way everybody is going on, you’d think that Mustaine had gone in public, named everyone’s mothers, and then given a vivid description of what it was like to fuck them all. But he didn’t. He quoted a US official, and US government memos.

And *he* is the bad guy? Um, sure thing. Shoot the messenger.

Everyone is upset because they believe that Mustaine is ragging on their “country”. It is possibly the most brain-dead thing to do: rant ignorantly about someone based on your personal offense because of what you invest into authority structures.

Since when did metallers give a fuck for authority? Dave Mustaine is a true patriot: he’s concerned about the state of the political leanings of his country of citizenship, and he wants to bring it to people’s attention. He’s a huge public figure, so he has the ability to *be noticed*. The ramblings about him being an arsehole, or a cunt, or whatever, are coming from a purely jingoistic perspective.

What’s jingoism you ask? Jingoism is extreme patriotism, esp. in the form of aggressive or warlike foreign policy. It is patriotism that has gone bananas, and causes people to smash their music collections (for example).

Dave Mustaine hasn’t done himself any favours in terms of his drug use, and going on about God (which he’s entitled to do, considering he died – remember that?). So of course everybody just screams “HE’S INSANE”.

Have those screamers listened to Mustaine speak? Have they read anything about the political state in their country recently? Are they not aware of what a False Flag event is, and how and when they happen – worldwide? Are they so reliant on their own authority structures, so brainwashed, so unable to think for themselves, that they believe that whatever the government does is gospel, and for the good of the people? Sure seems like it.

The smashing of a collection is an intensely personal thing to do. It speaks to me of personal anguish, of a severe betrayal of trust. It comes from a deep-seated resentment, driven by an anger that is not otherwise able to be expressed. The smashing of the collection is now extended to Forbidden fans, too, thanks to Chris Locicero’s very sane enunciation about how ‘hey guys listen to Mustaine even if he is a douchebag… maybe he’s onto something’.

It says a vast amount about the power that the US government has over its people. Align yourself to a flag, rather than an ideal of what is good or right, for example.

It says an equal amount about the absence of a distanced perspective, of objective evaluation and critical thought.

If every one of those people had sat back and thought ‘ok weirdo, why are you saying this?’, and then did some independent reading and considering, it’s quite possible that they’d come to a similar conclusion.

Mustaine is a political beast, he always has been. It is why early Megadeth releases had the impact that they did. It was never just about cranking out killer thrash. There has always been a message behind Mustaine’s work. Therefore, an angsty reaction towards this particular political message has me a little bit baffled.

Having said that, I am also aware that fans of today are not the fans of the 1980s, and are generally not independent thinkers. If they were independent thinkers, instead of keyboard warriors, commentary on sites like Blabbermouth would be of a vastly different character.

It seems to me that gone are the days of the Intelligent Person Who Listens To Metal. It appears to have been replaced by the Aggressive Boofhead Who Likes Metal Because It Sounds Like Bashing People.

Americans love to talk about Free Speech and how they have rights to this, that and the other. To retain this, and to retain some of the Rest of the World’s respect, it would behove a lot of them to stop and think. Think about how calling Mustaine an arsehole because he quoted one of your senior officials is not at all progressive, intelligent, or clever. Instead, it proves to the rest of the world that whatever the concept of “Freedom of Speech” is, it certainly is not the liberty to have a considered opinion about something backed up by fact. What it is instead, is the Freedom to Say Whatever Everybody Else Is Saying, even if that “whatever” is fed to the bulk of the population through the media.

Since Aristotle, who was one of the great philosophical democratic thinkers, there has been a long-standing understanding that critical thinking is an intimate element of democracy.

Think about that. Because regardless of whether Dave Mustaine is a drug-fucked moron (as many people believe), he still thinks critically about big issues, and his commentary should be taken for what it is. You can assess what he says, do some reading, watch some videos, think about it for a while, and come to your own conclusion.

That is what critical thinking is all about. If instead you are going to smash your collection, berate Megadeth (and any other artists who support a critical assessment of a country’s politics), then you don’t need someone to tell you that you are incapable of independent thought: you are proving it to everyone who sees what you write, and hears what you say.

Even if you love your country, if you live in a Western world, you can’t put your blindfold on and exist happily ever after. Your political systems require you to be an active, independent thinker.

Your heroes, believe it or not, are people too. They have capacity for critical thought. They comment on tricky things, they write music about it.

Am I the only one who has noticed that major metallers are writing lyrical content about the state of the world lately? Hell no. Are the majority of fans ignoring it? Hell yes.

Don’t take the comments of your heroes so personally that you turn into a raging fuckwit. Instead, if they are truly your heroes, you might want to take some notice of what they say. Think about it. Chew on it. Do your own research and come to your *own* conclusion. Don’t let the media influence you, or your mates influence you, or your fear of authority influence you. If you do, then you might as well start screaming for a dictatorship to be put in place: you clearly don’t value your own ability to think clearly enough to influence your world’s politics or direction.

Think about that. And then assess whether Mustaine is bat-shit crazy, or whether actually he is saying something of potential value.

The United States has a long history of being governed by black-and-white politics, but that does not mean that its people need to be the same way. There are always shades of grey in between, and sometimes it’s in the grey area that we don’t want to look too closely for fear of what we will find.

3 thoughts on “On Dave Mustaine and the World’s Wrath”