What’s the future of heavy metal? Leticia talks to Hysteria

What’s the future of heavy metal? Hysteria Magazine talks to founder of Metal as Fuck, and author of Music Journalism 101, Leticia Mooney. Find out what she had to say >> 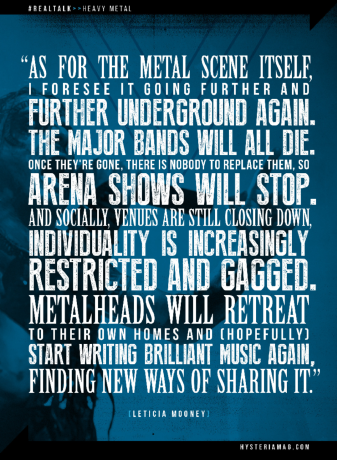 What’s the future of heavy metal? asks Australian rag Hysteria Magazine in this month’s issue. To find out, they went and asked a butt-load of people – including me!

(Well, when I say ‘they’, I really mean the very lovely and talented Tom Valcanis, a man who I have been privileged to edit and mentor at Metal as Fuck, and with whom to write as a peer in other projects since.)

For a rocker like me (one whose focus is much more about growing a company than it is about going to shows), it was a difficult question to answer. I was afraid I’d come across as this brittle old woman, filled with skepticism and visions of apocalyptic doom. My life now is a long way away from the twenty-something, going-to-gigs-every-damned-night-of-every-week that I once was. These days I’m more likely to read Strategy+Business than I am to spend any time on Blabbermouth.

But, I was honest – and my distance from the industry gives me a unique perspective, one that isn’t pressured by industry wiles and publicity needs and hype. Instead, it’s much more measured and critical. In music particularly, it’s important to have a voice like that, in amongst all the yeah it’s awesome stuff you tend to get by those embedded in it much more significantly.

And then when I saw the issue, I got quite a start to see that my dark view of the future was given a full-page quote.

Hell, I think the only other person to get that much space was Devin Townsend himself. Here’s a sneaky screenshot is:

The rest of that piece went something like this:

So, while I think the immediate 10-15 year future is bleak as fuck, long term I think it will find a resurgence.

I might be bleak about it because I don’t read metal mags, I don’t go to shows, and I’m middle-aged and all the young kids seem like posturing poseurs with bad hair. There are some fantastic releases coming out but I don’t see the pool of talent being refreshed with excellent young songwriters.

For metal that is going to be a huge, huge problem.

Go and read the entire piece (it’s quite long) at Hysteria Magazine. It’s not on the website, but you can download the app and the issue for free. Value for money in the modern age!

Huge thanks to Tom and the guys at the magazine (and the page designer; wow!). It’s very humbling – thank you, I appreciate it enormously. 🙂