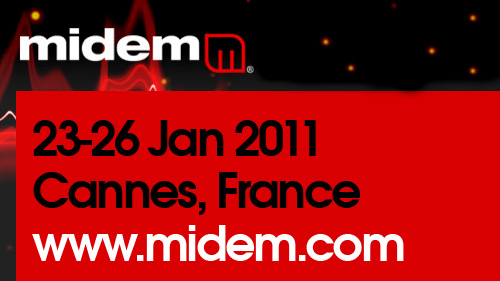 At the major European music conference of the year – Midem – it seems that parts of the industry were starting to seriously consider the way things roll. Finally.

One of the considerations was the digital music industry. According to The Music Network (28 Jan), in an article by Eamonn Ford, there are not enough revenue opportunities in the digital sphere. And, following on from that, that the digital arena is far too cluttered, with only a few surviving the battle.

Interestingly, it seemed, from this article at least, that much of the concern was sparked by a lack of numbers in Cannes this year. Midem wasn’t as busy as usual. The lack of numbers caused some to suggest that perhaps there might be a surplus of services in the industry; yet those services aren’t raking in enough money to enable people to make the trek to France.

But out of the article itself, there were two key factors that hit chords with me. The first was this:

Adrian Pope (director of digital & business development at [PIAS] Entertainment Group) countered, “We need to step back from that noise and clutter, set our objectives with the artist and pick the tools that best fit those principles […] The right tools for the right fit. Keep it simple.” He cited Arcade Fire as the shining example of the ‘less is more’ school of thinking where they just did a handful of things online but did them incredibly well and retained their credibility.

As anybody who reads my Music Industry Mores column would know, my perspective is that the entire industry needs to do a handful of things and do them well. I don’t just say this in reference to digital music, but in reference to things like marketing, publicity, and bricks-and-mortar retail sales.

I find it ironic that the supposed ‘failure’ of digital music, in this sense, is coming down to “the right tools for the right fit”. I know a lot of promoters who could learn a lot from that statement, especially in terms of how shows are advertised. And, if we want to get narky, “the right music for the right audience” comes down to the same thing. Sell stuff that people want to buy.

The second was the apparent “standout” presentation of the day. It was by Forrester Research analyst Mark Mulligan, who announced:

“digital music is just not working at the moment” … He declared, “Digital music has failed in its three key strategic objectives – to offset the decline in CD sales, to generate a format replacement cycle and to compete effectively with piracy.”

The problem, as he saw it, was that the industry was focused too much on ownership (a hangover from the “analogue era”) and a new generation of ‘Digital Natives’ (those aged 12-15 who have grown up immersed in digital) prioritise access and experience over ownership. He said the ‘Transitional Generation’ (16-24-year-olds) were simply “recreating analogue behaviour in a digital context” by buying/acquiring “units” of music and ripping CDs.

the very future for the digital music industry lies in demolishing reductive thinking about ownership and moving to what he defined as the SPARC model (where services are Social, Participative, Accessible, Relevant and Connected) that appeal to the Digital Natives that offer the most hope here.

If it doesn’t, he warned, the industry simply has no future.

Hooray, somebody has finally said it! The industry has no future if it continues in its old-school, ownership-is-everything model.

Of course, I am amongst the first to argue that bands need to be paid for their intellectual property, and that they need to retain ownership of it. But what Mulligan is saying, is that the industry needs to morph into a facilitation role. It needs to change from a restrictive, big brother-type figurehead, which allows access on certain terms, into a gateway that enables access to materials, and connects people worldwide. It’s a very different way of thinking.

The problem that the industry is facing is one of trying to monetise a SPARC model of business. It is here that the music industry could take a leaf out of the open access journal publishing industry. The issue these guys are facing is provision of access while still being financially viable. It’s the same battle, really.

Allow me to take you into a very different field for a moment (from this intro to SPARC business models in journal publishing):

A journal’s value proposition represents that part of its offering for which a specific client segment is willing to pay. In the context of peer-reviewed journals, this payment is not confined to a cash fee for access to the journal. It also comprises an author’s choosing to publish in the journal and a researcher’s attention in reading the journal.

Thus the business model for an open-access journal addresses a three-sided market in which readers pay with their attention, funders (whether donors, user proxies, or advertisers/sponsors) pay for access to the target audience’s attention, and authors pay (with their content and, sometimes, with article fees) for the audience reach, research impact, and professional prestige that the journal delivers. The business model translates the author’s content and the reader’s attention into revenue to support the journal. A business model may comprise one or more value propositions for each of its target client segments. The relative strength of this value proposition—its power to generate income, capture researcher attention, and/or attract content submissions—depends on the extent to which it is unique; that is, the extent to which it delivers something of value—including content quality, content quantity, research impact, professional reputation, or audience reach—that no other journal delivers.

The financial potential and stability of any funding model, whether based on generating earned revenue or securing subsidies, are functions of how tightly the value delivered is aligned with the markets that benefit from it. While intuitively obvious, this point is sometimes ignored—especially when publishers seek subsidies for a journal—resulting in weak, poorly targeted funding models.

Confused yet? Don’t be. The value of any part of the music industry represents what a specific segment of the audience is willing to pay: in terms of content, attention, and actual money.

Listeners pay with attention; investors, advertisers and funders pay for access to that audience’s attention; and artists pay with content. And the strength of this overall value depends on the extent to which it is unique. If it is not unique, it is weak: it’s why niche businesses often do well, and those with many competitors fail.

It is no surprise that underground metal, for example, is a strong (if unfunded) sector of the metal music industry. But that it is because it is unique. It caters to a niche audience, the majority of whom are willing to shell out handfuls of dollars for access to materials that they want. The bigger the ‘visible’ industry gets, the less unique it gets. And you can see that in the rise of a million bands that sound the same, on tens of different labels.

The final point is that the value needs to be as perfectly aligned to its markets as possible. If it isn’t, then the model is integrally weak and needs to be reviewed.

The music industry has been so insular for so long that it is now scrambling to put something in place to ensure its existence. It is actually fairly simple; but it does require a lot of work and a lot of thinking. I couldn’t even begin to provide solutions.

The debates at Midem this year highlight that the industry needed to have been thinking differently, much earlier. It didn’t. If it did, it could have grasped how the Digital Natives think and use materials, and begun to implement more flexible models. They didn’t, and now they’re struggling.