Athens 2011 and the Greek Revolution. Don’t believe the media. 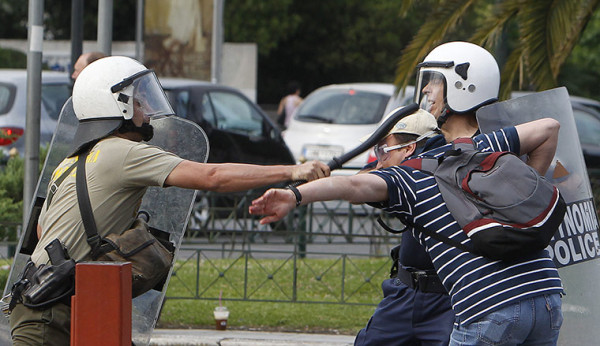 The media is lying about events in Greece. Read these & support the people.

This is not so much a blog post than a collection of tweets from a good friend who resides in Athens. I’m posting it because people need to know about it. The more people who know about it, the better! So please share, email, re-blog, re-link, whatever.

These are posted in reverse chronological order because that is the way Twitter’s timeline works: the oldest are at the bottom, so start there and read upwards. It’s quite long; please stick with it to the end.

I suggest that if you want to stay informed, follow people who actually live in Athens. The timeline is updated every few minutes. This is merely a snapshot.

OrpheusMTV Orphy Spiliotopoulos
Unarmed Greek protester gets slammed on the head by cop after begging not to be hit youtu.be/S20_JuaX8gg – #Syntagma #Athens #Greece
2 minutes ago
Cyberela Cyberella
by OrpheusMTV
Police hitting on the head protesters (pick via Guardian)http://twitpic.com/5iqyjw #Syntagma #j29gr
1 hour ago

OrpheusMTV Orphy Spiliotopoulos
The police has brutally beaten hundreds of peaceful protesters and bystanders today in #Athens – I bet you don’t hear that on your news!
9 hours ago

thesspirit Sofia Thesspirit
by OrpheusMTV
I don’t believe in god but ppl @ #Syntagma sqr need him now. Police has blocked all exits from the sqr. Tents are burning #greekrevolution
7 hours ago

OrpheusMTV Orphy Spiliotopoulos
Greek politicians = Rich liars, thieves, against their own ppl, against any human logic
7 hours ago

Nigel_Farage Nigel Farage
by OrpheusMTV
The vote in Athens is a Greek Tragedy, keeping the country imprisoned inside an unsuitable currency union and with unservicable debts.
8 hours ago

OrpheusMTV Orphy Spiliotopoulos
Congratulations to the Greek government for voting for measures no average Greek will be able to cope with. I hope #comet Elenin lands on em
8 hours ago

OrpheusMTV Orphy Spiliotopoulos
Another violent day at #Syntagma Sq, courtesy of the Greek government, the police & their provocateurs. Austerity reforms were voted = FAIL
23 hours ago

ibnezra Joseph Dana
by OrpheusMTV
The city of Athens if basically covered in a cloud of tear gas. You can smell the pungent odor everywhere
29 Jun

Wreckus Wreckus
by OrpheusMTV
Carry a cloth covered in vinegar in a bag. If you get tear gassed, breath through the cloth. #syntagma #greekrevolution
29 Jun

rebeldog_ath rebel dog
by OrpheusMTV
we NEVER had such a large amount of teargas in one day. The discomfort area is several kilometeres #syntagma #athens #greekrevolution
29 Jun

OrpheusMTV Orphy Spiliotopoulos
Extensive & INHUMAN use of chemicals & teargas has been made by the police at #Syntagma Sq in #Athens, #Greece.
28 Jun

hannitron paranormal witch
by OrpheusMTV
“There has been more teargas fired than at any other protest.” #Greece #Syntagma #28jgr #25mgr gu.com/p/3v744/tw via @guardian
28 Jun

OrpheusMTV Orphy Spiliotopoulos
The use of teargas by riot police at #Syntagma Sq exceeds any “tolerable” level for human beings. This is inhuman! – #Greece
28 Jun

OrpheusMTV Orphy Spiliotopoulos
I’ve been observing the tweets sent out by major network news anchors & correspondents. They make me sick. They’re all lying. All of them.
28 Jun

OrpheusMTV Orphy Spiliotopoulos
Do not believe the mainstream media. Plain Greek protesters are NOT clashing with the police. It is a fake setup! Do not trust the media!
28 Jun

OrpheusMTV Orphy Spiliotopoulos
Tens of Spartans marching in protest all the way from Sparta to Athens (some 230 kilometers on foot), due to arrive in Athens tomorrow night
22 Jun

2 thoughts on “Athens 2011 and the Greek Revolution. Don’t believe the media.”